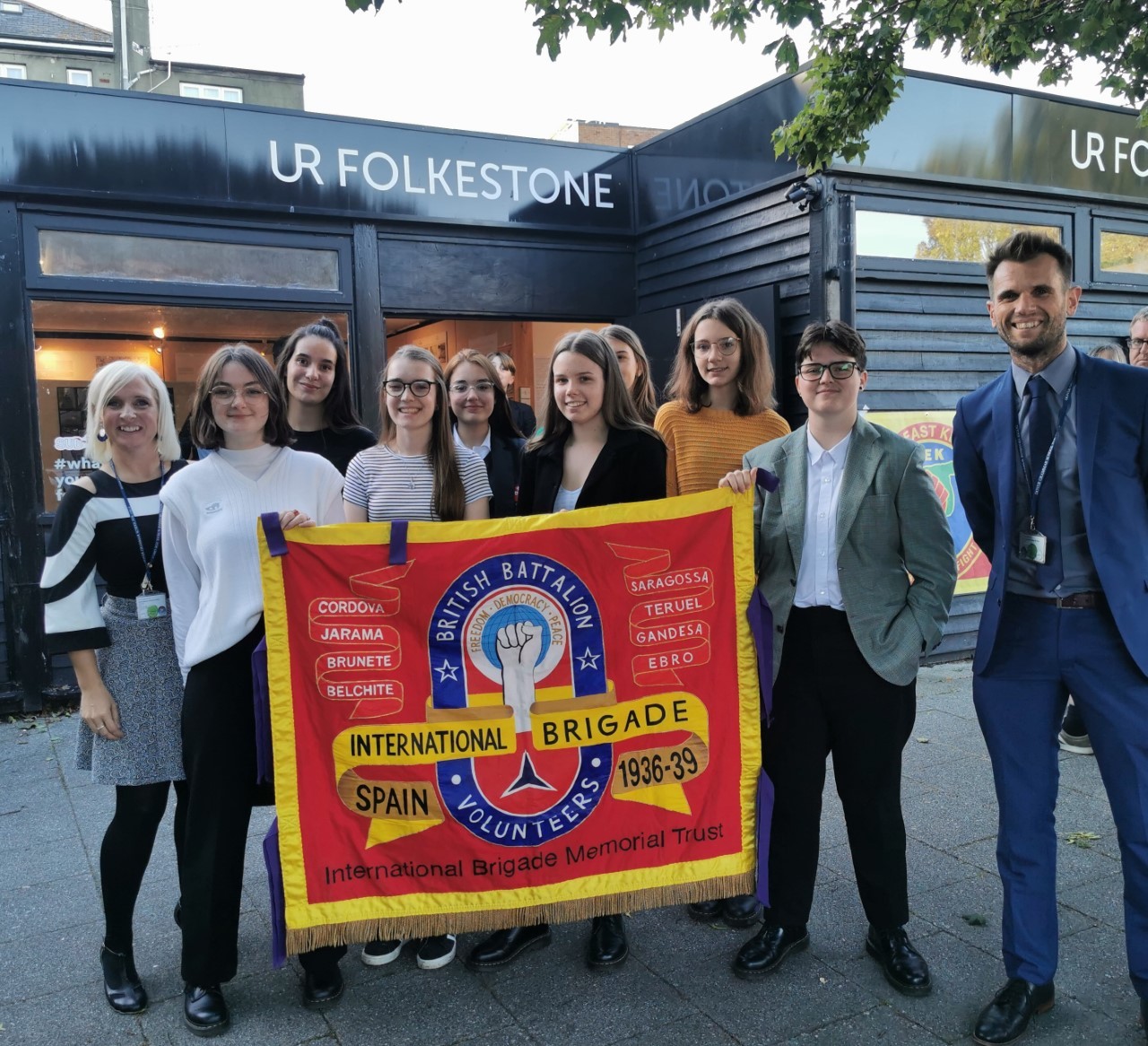 A temporary exhibition in the heart of Folkestone hosts Kent’s first memorial to the Spanish Civil War volunteers, organised and curated by students from Dover Grammar School for Girls.

The Spanish Civil War was a conflict between 1936-39. Following the outbreak of rebellion by the forces under General Franco and supported by the Fascist, Axis powers of Italy and Germany, over 2,000 British volunteers travelled to Spain to defend the democratic government of the Spanish Republic. Among the notable volunteers such as George Orwell, were a number of East Kent members including Harry Addley, Arthur Ovenden and George Gorman from Folkestone. From Dover they were joined by John (Jock) Black, Fredrick Strachan and Horace Dowsey.

The history scholars’ group at Dover Grammar School for Girls took up the story and researched the background of these volunteers. They accessed the help of historians Professor John Bulaitis and Dr Richard Baxell from the International Brigades Memorial Trust.

Subject leader Thomas Millard added “the students have created genuine, fresh research from a range of sources. They have made a new contribution to the history of the Spanish Civil War and extended their own knowledge of local history. Their research is therefore ground-breaking for historiography”.

Thanks to the support from the Folkestone Fringe and the Urban Room, coordinated by Dr Christopher Houghton-Budd, an offer was made to host the students research which has led to a blossoming of creative work by students from DGGS. Art students created a memorial to Harry Addley on the site of his restaurant through sculpture, painting and a replica of ‘Harry’s Jacket’ which stands on the plinth at the foot of the Old High Street in Folkestone, facing Spain. Harry Addley died in the first battles of the Spanish Civil War in December 1936. To this day he has no memorial despite serving in the First World War. Subject Leader for Art, Melissa Datchler added “I am incredibly proud of the achievements and outcomes all our students have made. There are some outstanding individual and collaborative responses to such an important cause that would never have come to light if it wasn't for the work of some very keen historians and the students of Dover Grammar School for Girls. The work reflects a sensitive understanding of the injustices that have taken place. The hard work of students and staff across different subject specialisms has resulted in a diverse and well-informed exhibition of work that is a rare find.”

It has been very rewarding to see the opportunities our students have had to widen their knowledge, skills and understanding of the horrors of conflict. Teachers have consistently given their time to encourage our students to succeed in all areas of the curriculum and to see this collaboration between so many subject areas in one well-executed exhibition demonstrates how this approach develops higher-level thinking and boosts confidence amongst our younger generation.

English students at the school created black out poetry using extracts from Hemmingway’s For Whom the Bells Toll and media students blended this work with images from photographs of the conflict by Spanish women and our computing student drew everything together using QR codes.

The launch was attended and supported by delegates from the South East Trades Union Council and IBMT, alongside local dignitaries such as the Deputy Mayor and local civic ward councillors. The launch ended with a pledge for a permanent memorial to these brave volunteers who sacrificed their lives for democracy. They stood in defiance of the fascism of Hitler and Mussolini against which so many British people would later join the struggle in the Second World War. East Kent’s role in this international story is once again illuminated for all to share.